Arcade Sega Rally is a great game with worldwide reputation. The game consists of racing with different cars on various tracks. 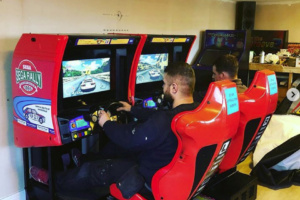 Arcade Sega Rally is a series of racing video games published by Sega and developed by several studios including Sega AM3, Sega and Sega Racing Studio.

The series released its first title, Sega Rally Championship in 1994. Initially, Sega Rally Championship was exclusive to arcade genre. So the original game designed by Tetsuya Mizuguchi, was released on the Model 2 board and became very popular in the arcades. And also this port was of excellent quality and looked much better than PlayStation racing games of the same era.

Although Sega Rally boasts only three tracks, with a fourth unlocked upon completion, it really is a case of quality over quantity. The different surfaces (asphalt, gravel and mud) realistically affects the performance of your vehicle. So either a Toyota Celica or a Lancia Delta, with a Lancia Stratos also unlockable. The handling of the cars is flawless throughout and requires real skill and concentration to get the best out of them. With each successive, and successful, attempt you will likely shave fractions of seconds off your best times. This will likely keep you practicing for hours.

So if you miss playing it, book the Arcade Sega Rally and enjoy!

Also if you need more creative ideas for your parties, check our list of 25 fun activities for events!