Giant retro game machine brings back some great retro games which were a massive hit back in the days. 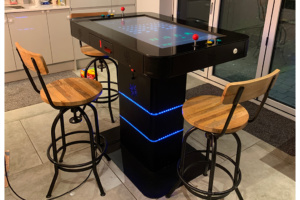 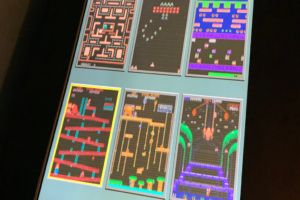 So just to know some of the games you’ll be able to enjoy if you book the Giant retro game Machine:

Pac-Man is an action maze chase video game; the player controls the eponymous character through an enclosed maze. The objective of the game is to eat all of the dots placed in the maze while avoiding four colored ghosts.  Blinky (red), Pinky (pink), Inky (cyan), and Clyde (orange) are the ghosts that pursue him. When Pac-Man eats all of the dots, the player advances to the next level. If Pac-Man makes contact with a ghost, he will lose a life. The game ends when all lives are lost. Each of the four ghosts have their own unique, distinct artificial intelligence (A.I.), or “personalities”. Blinky gives direct chase to Pac-Man. Pinky and Inky try to position themselves in front of Pac-Man, usually by cornering him. Clyde will switch between chasing Pac-Man and fleeing from him.

Space Invaders is considered one of the most influential video games of all time. It helped expand the video game industry from a novelty to a global industry. The game ushered in the golden age of arcade video games.

Space Invaders is a fixed shooter in which the player moves a laser cannon horizontally across the bottom of the screen and fires at aliens overhead. The aliens begin as five rows of eleven that move left and right as a group, shifting downward each time they reach a screen edge. The goal is to eliminate all of the aliens by shooting them. While the player has three lives, the game ends immediately if the invaders reach the bottom of the screen.

The aliens attempt to destroy the player’s cannon by firing projectiles. The laser cannon is partially protected by stationary defense bunkers. These are gradually destroyed from the top by the aliens and, if the player fires when beneath one, the bottom. As aliens are defeated, their movement and the game’s music both speed up. Defeating all the aliens brings another wave which starts lower, a loop which can continue endlessly. A special “mystery ship” will occasionally move across the top of the screen and award bonus points if destroyed.

The games of the first genre are mostly single-screen platform or action puzzle types, featuring Donkey Kong as the opponent in an industrial construction setting. The first game was the 1981 arcade game Donkey Kong, in which the characters of both Donkey Kong and Mario debuted. In the game, Jumpman (renamed Mario) must ascend a construction site while avoiding obstacles such as barrels and fireballs to rescue his girlfriend Pauline from Donkey Kong.

So for more interesting ideas, check our 25 fun activities for events list!